I’m a Mainer at heart and in reality. I was born and raised here. I’ve never felt the desire to go anywhere else to live. This state is beautiful, but it can also be deadly. It gives a person character. It also gave us Stephen King.

This morning, I fear I might not have done enough. As most people know, King’s latest book came out today. The author began his book tour elsewhere in our country, but I was only concerned with one thing: getting a ticket for next Monday. 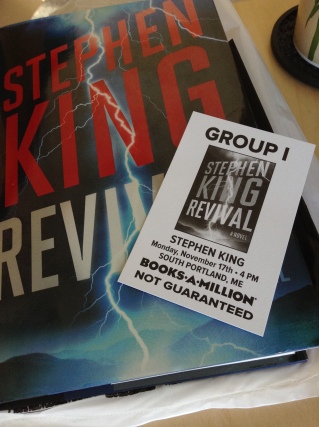 That’s when Mr. King will be signing copies of Revival at the Books-A-Million in South Portland, the city I work in.

I knew I should have been in line at 5:00 a.m., but I couldn’t get myself up in time. I am not a morning person by any means. But, I roused myself at 7, and then rushed through the bathroom and out to my car. I stayed at a friend’s house nearby in Westbrook so that the drive wouldn’t be too long.

The radio set my fears on fire. The line for the book store, which didn’t open till 9, was already around the building.

How many books would be sold? And how many tickets would be given out? I almost gave up, but my love of Mr. King’s books pushed me onwards. I parked near the back of the line and hurried to get my place.

The line only stretched around three walls of the building when I arrived. I had a chance, I knew. But, then my fears were stoked again when I was told that each person was able to purchase up to three books and get three tickets. Three books? I thought. There’s no chance that I will get a ticket at that rate!

Easing my fears, one of my friends arrived a few minutes after me and we chatted across the gap in the line between us. We were both hopeful.

It was described to me as one of the most terrifying he has ever written. Of course, this could be said of any new book he writes, but that’s not exactly true. He has been taking chances in the past few years. He’s been stretching his genre abilities. But, it’s been a long time since Doctor Sleep came out, and I am craving something to chill my bones.

The line started moving. I chatted with the people around me. One man behind me was in line so that his younger daughter might have a shot at a signed book from King. He is her favorite author (and I cheered for that). As we moved closer to the store entrance we saw the remnants of the people who were camping out since 5 or earlier. Chairs and blankets littered the sidewalk. Word traveled fast through the line that the first man in the line had been camping out since 10:00 a.m. the previous morning.

That’s dedication, I thought. But, there was still a chance.

Another one of my friends showed up to keep me company as the line moved, and we were amazed at how uneventful it seemed. Nobody was pushing. Everything was orderly.

The line snaked through the store as the staff smilingly got us all inside. More than once we were tempted to grab another item in our maze through the store. But, I just wanted the book and a ticket. I was so close I could taste it.

As I neared the counter, the woman at the head informed us that there were only a small number of tickets left. It was a sigh of relief that I was just in reach, but there was a catch. The tickets were divided into lettered groups. Group A thru H were guaranteed a signature and opportunity to see Mr. King in person next week. I was in Group I, and though I had a ticket, I was not guaranteed a signature or chance to see the master author.

But, there’s still hope! Someone ahead of me was almost in tears and threw a few things on their way out, but you have to have faith. It’s what Mr. King’s newest book deals with, after all. Is it our destiny to meet the man who wrote many of our favorite books? Or will it just be a coincidence that circumstances will get in our way, leaving us with just a glimpse of the man behind The Dark Tower.

Happy launch day, Mr. King, and all those who bought the book. Safe travels on your book tour!

2 thoughts on “I Stood In Line For Stephen King”