It’s been a while since I’ve updated my blog, with a few posts that are still in the draft stage. Even with those posts on the back burner due to NaNoWriMo, I thought I’d give an update on what I’m working on. 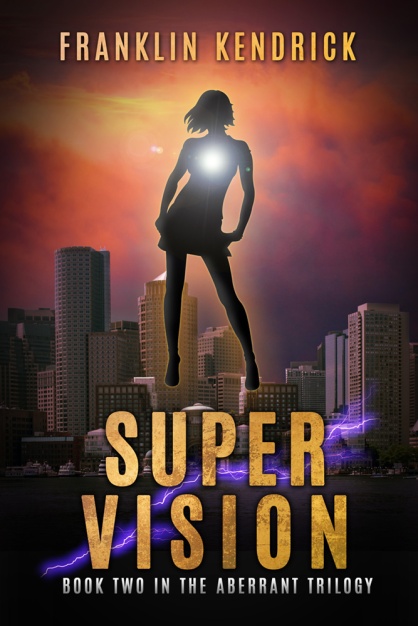 The sequel to Super Charged is well under way, and I estimate that I’m about halfway done with my first draft. You can see the tentative cover for Super Vision above, and I’m very pleased with how it’s come out. You be the judge, though, and let me know if anything could be better!

Who is that on the cover? Could it possibly be Mae? I’m not saying (but, she is one of my favorite characters). You will have to wait to find out.

Super Vision is a ton of fun to write, and I’ve chosen it as my official NaNo project this November. But, there is also another project I am trying to wrap up that is a bit delayed on a personal deadline level, and that’s a return to Horror for me – and a return to the world of The Entity.

Tentatively titled A Haunting In Shapleigh, this book is a sequel to The Entity, though it features a new house and a new family that becomes terrorized by the paranormal. The threads connecting this sequel to the original miniseries are pretty intricate, and as I wrote in a previous post, this is a re-tooling of my original idea for The Spectre. Not to let my readers of that down, this book will be a full-length tale in one single volume, with hopeful others down the line. There is a literal file on my computer with blurbs and outlines for other ghostly stories connected to this world I’ve explored, so the plan is to write more of them in the future.

I will post a cover for that book when I get closer to a finished product.

Writing is fun, but it sure is hard work, isn’t it? I’ve realized that as I started NaNo with a bang and now am deep in the trenches. Here’s hoping that the action scenes coming up are going to boost my word count and jump-start my adrenaline!

If you’re taking part in NaNo, keep going! You can do it! Just a few pages a day is all you need.