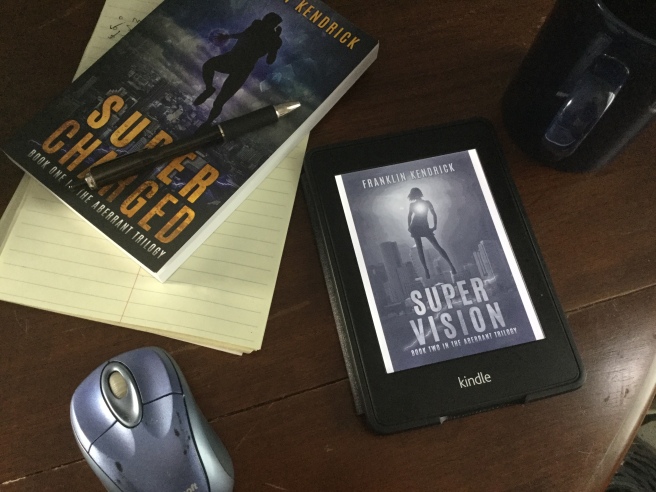 I am very excited to report that Super Vision, the second book in The Aberrant Trilogy, is finally in the proofing stage!

Some of you might be thinking, “Hey, why is that such a big deal? Don’t you do all the work yourself?” Well, yes, that’s true. Physically all I’ve done is compile my draft into an eBook for proofing on my Kindle, but it’s a milestone for me because this marks the first year in my history of indie-publishing that I managed to crack out three – yes, mark that – three books in a single calendar year.

This also marks my first true full-length sequel, not counting the in-progress sequel to The Entity, which I hope to make good on in the early new year. That one will also be full-length.

So, what does this mean for readers of Super Charged? It means that I’m getting closer to publication. I don’t have a firm date yet because I don’t want to disappoint, but once the book is given a good read-through and ironed out (typos, stupid mistakes I made with my dictation software, etc.) then I will upload the book and set it for publication.

There won’t be a massive pre-order length this time around. I tried that and, while it got some traction, I’d rather tone it down for this book.

A few tidbits for anyone waiting for Super Vision, no spoilers from me, but I can say that this book is longer than the first. I wrote the majority of it at the end of October and November, with bits of the end wrapped up this month. I think the world is opened up a lot more in this book, and there are some new faces sprinkled in with the old. I had a blast writing it, and I really hope that it lives up to the first book in quality and entertainment.

Without any more rambling, keep an eye out for more news in the coming weeks. I’ll be sending out an email blast to my list once the book is uploaded to Amazon. I might also publish some free goodies on the blog here, including some abandoned story ideas from my school days relating to Super Guy’s world. These were typed the old-fashioned way, on a typewriter! If you can believe it… I was a super nerd like that.

I hope you’re all recovering from the holidays and in good health. Until next time!